SEO in simple words is about improving your website to get more traffic from Google.

Now, there are hundreds of metrics or ranking factors that Google uses. These factors fall into two categories; direct and indirect. In a later post we will discuss direct factors, but for now let’s explore examples of indirect.

If this is your first time at Bounce Rank please consider bookmarking the blog, so you can stay up to date on all my future post.

This is how long someone spends on one of your webpages, before going back to the search results page. It is generally calculated in minutes and seconds.

Now, there is controversy on wether or not this is a ranking factor, in fact, Google’s Gary Illyes says:

“Dwell time, CTR, whatever (Rand) Fishkin’s new theory is, those are generally made up crap. Search is much more simple than people think.”

But as an SEO specialist, it is common for Google to brush off a lot of theories as mumbo jumbo.

but there’s data that supports it might be a factor:

In a 2016 study on website engagement metrics by Moz’s own Larry Kim, he found that:

As “time on site” (Dwell Time) increased, so did organic rankings.

Here’s some key takeaways from the article: 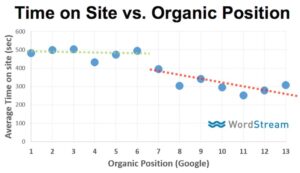 I believe this is common sense:

As people spend more time on your site, it shows that your content may be valuable to them.

So even though Google says it’s not an important factor. I do believe it is worth paying attention to.

This is the percentage of users who leave your website after viewing only one page.

In the post: 200 Google Ranking Factors by one of my favorite SEOs; Brian Dean, he found that:

“Websites with a higher bounce rate ranked lower on Google.” This makes sense, as I know from experience, websites with higher bounce rates definitely have issues with layout, content, branding, etc.

Again there is controversy in the SEO community about this being a direct factor.

” (They) Are correlation factors and not causational factors”.

Albeit correlational, it still shows that this a factor worth monitoring.

You’ve may have heard of Flesch Reading Ease. This calculates how easy it is for your web content to be read by a human.

Again Google’s own John Mueller has come out an said that it is not a direct ranking factor:

“So from an SEO point of view, it’s probably not something that you need to focus on, in the sense that, as far as I know, we don’t have kind of these basic algorithms that just count words and try to figure out what the reading level is based on these existing algorithms”.

“There no correlation between readability and rankings.” 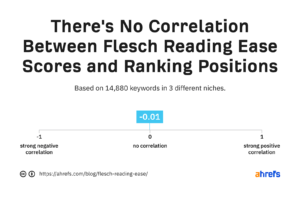 While the data to support this is not suffice:

Michal made a great point for why we should still consider it:

“If searchers finds your content hard to read and understand, they’ll probably leave. This leads to negative user experience signals like a low dwell time, time on page, and a high bounce rate, which may signal to Google that your page isn’t a great result.“.

So again while there is no concrete data to support that readability is a ranking factor.

You may want to consider making your content easier to read as it can:

Decrease bounce rate, and increase dwell time. Which both lead to a better user experience.

What do you think?

Okay, so there you have it 3 indirect Google Ranking signals.

Do think these should be considered ranking factors?

Are there other factors I should have mentioned?

Leave me a comment  and I will reply to you within 24 hours.

Roggie (Raj) Clark is a Senior SEO Manager, specialist & career mentor with 7 years of experience. He has worked with a wide range of clients in many industries including B2B, SaaS, Fintech, home improvement, tech-startups, dentistry, and eye care. He started the blog; Bounce Rank, as a way to help business owners grow their website traffic and to help people who want to get a job in SEO.
Scroll to Top